Due to unit differences in the potency assay, unit doses for BOCOUTURE are not interchangeable with those for other preparations of Botulinum toxin type A.

BOCOUTURE is indicated for the temporary improvement in the appearance of upper facial lines in adults below 65 years when the severity of these lines has an important psychological impact for the patient:

4.2 Posology and method of administration

Due to unit differences in the potency assay, unit doses for BOCOUTURE are not interchangeable with those for other preparations of Botulinum toxin type A.

For detailed information regarding clinical studies with BOCOUTURE in comparison to conventional Botulinum toxin type A complex (900 kD), see section 5.1.

BOCOUTURE should only be administered by an appropriately qualified healthcare practitioner with expertise in the treatment of the relevant indication and the use of the required equipment, in accordance with national guidelines

After reconstitution of BOCOUTURE a dose of 4 units is injected into each of the 5 injection sites: two injections in each corrugator muscle and one injection in the procerus muscle, which corresponds to a standard dose of 20 units. The dose may be increased by the physician to up to 30 units if required by the individual needs of the patients, with at least '3-months' interval between treatments.

An improvement in the vertical lines between the eyebrows seen at maximum frown (glabellar frown lines) generally takes place within 2 to 3 days with the maximum effect observed on day 30. The effect lasts up to 4 months after the injection. 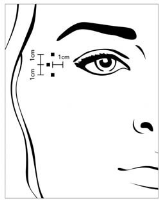 The total recommended standard dose per treatment is 12 units per side (overall total dose: 24 units).

An improvement in lateral periorbital lines seen at maximum smile (crow's feet lines) mostly takes place within the first 6 days with the maximum effect observed on day 30. The effect lasts up to 4 months after the injection.

The recommended total dose range is 10 to 20 units according to the individual needs of the patients, with at least '3-months' interval between treatments. After reconstitution of BOCOUTURE a total dose of 10 to 20 units is injected into the frontalis muscle in five horizontally aligned injection sites at least 2 cm above the orbital rim. Per injection point, 2 units, 3 units or 4 units are applied, respectively. 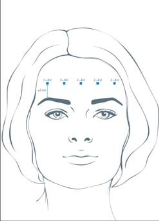 An improvement in the horizontal forehead lines seen at maximum contraction usually occurs within 7 days with the maximum effect observed on day 30. The effect lasts up to 4 months after the injection.

If no treatment effect occurs within one month after the initial injection, the following measures should be taken:

• Review of Botulinum neurotoxin type A treatment as an adequate therapy

• If no adverse reactions have occurred during the initial treatment, an additional course of treatment can be performed in compliance with the minimum interval of 3 months between the initial and repeat treatment.

After reconstitution, BOCOUTURE should be used immediately and may only be used for one treatment per patient.

The intervals between treatments should not be shorter than 3 months. If the treatment fails, or the effect lessens with repeated injections, alternative treatment methods should be used.

Before and during the injection, the thumb or index finger should be used to apply firm pressure below the edge of the eye socket in order to prevent diffusion of the solution in this region.

The injection should be done intramuscularly into the orbicularis oculi muscle, directly under the dermis to avoid diffusion of BOCOUTURE. Injections too close to the zygomaticus major muscle should be avoided to prevent lip ptosis.

Paralyzing of lower muscle fibers by injecting BOCOUTURE near the orbital rim should be avoided to reduce the risk of brow ptosis.

• Hypersensitivity to the active substance or to any of the excipients listed in section 6.1.

• Infection or inflammation at the proposed injection site.

4.4 Special warnings and precautions for use

Prior to administering BOCOUTURE, the physician must familiarise himself/herself with the patient's anatomy and any alterations to the anatomy due to prior surgical procedures.

Care should be taken to ensure that BOCOUTURE is not injected into a blood vessel.

It should be taken into consideration that horizontal forehead lines may not only be dynamic, but may also result from the loss of dermal elasticity (e.g. associated with aging or photodamage). In this case, patients may not respond to Botulinum toxin products.

BOCOUTURE should be used with caution:

• if bleeding disorders of any type exist

Undesirable effects may occur from misplaced injections of Botulinum neurotoxin type A that temporarily paralyse nearby muscle groups.

There have been reports of undesirable effects that might be related to the spread of Botulinum toxin type A to sites distant from the injection site (see section 4.8).

Patients or caregivers should be advised to seek immediate medical care if swallowing, speech or respiratory disorders occur.

The injection of BOCOUTURE is not recommended for patients with a history of aspiration or dysphagia.

BOCOUTURE should be used with caution:

• in patients with other diseases which result in peripheral neuromuscular dysfunction

• in targeted muscles which display pronounced weakness or atrophy

Too frequent doses may increase the risk of antibody formation, which can result in treatment failure (see section 4.2).

The potential for antibody formation may be minimised by injecting with the lowest effective dose given at the indicated minimum intervals between injections.

4.5 Interaction with other medicinal products and other forms of interaction

No drug interaction studies have been performed.

Theoretically, the effect of Botulinum neurotoxin may be potentiated by aminoglycoside antibiotics or other medicinal products that interfere with neuromuscular transmission e.g. tubocurarine-type muscle relaxants.

Therefore, the concomitant use Buy bocouture with aminoglycosides or spectinomycin requires special care. Peripheral muscle relaxants should be used with caution, if necessary reducing the starting dose of relaxant, or using an intermediate- acting substance such as vecuronium or atracurium rather than substances with longer lasting effects.

4-Aminoquinolines may reduce the effect of BOCOUTURE.

There are no adequate data from the use of Botulinum neurotoxin type A in pregnant women. Studies in animals have shown reproductive toxicity (see section 5.3). The potential risk for humans is unknown. Therefore, BOCOUTURE should not be used during pregnancy unless clearly necessary and unless the potential benefit justifies the risk.

It is unknown whether Botulinum neurotoxin type A is excreted into breast milk. Therefore, BOCOUTURE should not be used during breast-feeding.

There are no clinical data from the use of Botulinum neurotoxin type A. No adverse effects on male or female fertility were detected in rabbits (see section 5.3).

4.7 Effects on ability to drive and use machines

BOCOUTURE has a minor or moderate influence on the ability to drive and use machines. Patients should be counselled that if asthenia, muscle weakness, dizziness, vision disorders or drooping eyelids occur, they should avoid driving or engaging in other potentially hazardous activities.

Undesirable effects of the substance class Botulinum toxin type A

When treating other indications with Botulinum toxins, undesirable effects related to spread of toxin distant from the site of administration have been reported very rarely to produce symptoms consistent with Botulinum toxin type A effects (excessive muscle weakness, dysphagia, and aspiration pneumonia with a fatal outcome in some cases) (see section 4.4). Undesirable effects such as these cannot be completely ruled out with the use of BOCOUTURE.

Serious and/or immediate hypersensitivity reactions including anaphylaxis, serum sickness, urticaria, soft tissue oedema, and dyspnoea have been rarely reported. Some of these reactions have been reported following the use of conventional Botulinum toxin type A complex either alone or in combination with other agents known to cause similar reactions.